You Should Be Listening To: Frozen 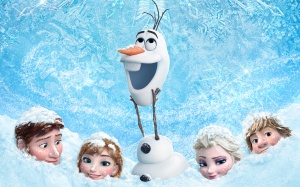 Yes, a new feature! Huzzah! This newly-formed category entitled “You Should Be Listening To” is basically where I tell you about what cast album I’m currently obsessed with, which brings me to our first edition…

Have you seen Frozen yet? It’s the new animated Disney film featuring actual, real voice talent. Unheard of I know. Where’s Russell Crowe as Prince Hans, right? The singers get to speak the roles, too. Crazy talk! The movie broke all kinds of records over Thanksgiving. It grossed $67.4 million over the 3-day weekend, making it the largest opening for a Walt Disney Animation Studios film. It was also the second overall highest in sales for the 5-day weekend after Catching Fire.

The movie is cute and endearing, but what I’m really posting (aka obsessing) about is the music. The nine songs are written by Robert Lopez and his wife, Kristen Anderson-Lopez. You know Robert Lopez’s music if you’re a fan of Avenue Q or The Book of Mormon. The husband-and-wife writing team also penned Finding Nemo – The Musical (now playing at Animal Kingdom!).

So not only do you have Broadway-caliber writers, but as I said above, the characters are voiced by real Broadway talent, many of whom are Tony nominees. The cast includes Josh Gad, Jonathan Groff, Santino Fontana (this collection of videos is also worth your time), Idina Menzel, and Kristen Bell. I mean, come ON. And yes! Even Kristen Bell was on Broadway (like in the flop, The Adventures of Tom Sawyer)!

Now, my roommate and I are obsessed with all of the songs so go Spotify the soundtrack after you see it. The collection is great. There’s the classic “Be Our Guest”-style group number (“Fixer Upper”), the hopeful ingénue’s number (“For the First Time in Forever”), and the hilarious sidekick tune (“In Summer”). The only crime is Groff doesn’t get a full song. What is that about?

But let me highlight two of the songs. The love song is called “Love Is an Open Door” and is sung by Bell and Fontana. It’s so adorably peppy, full of clever lyrics and melodic surprises, and also manages to poke fun at the form at the same time. Then there is the big power ballad “Let It Go” sung by Menzel. The roomie and I first got a preview of this when we were down in Disney World in November. At Mickey’s Very Merry Christmas Party in Magic Kingdom, there was this epic light show projected on Cinderella’s castle, and we got to see a 30-second preview of this song. I was particularly tickled to hear Idina’s voice ringing out across Disney. She’s come so far!

Now what I’d love to do is link all of these songs so you can hear them, but I’d rather you go check out the movie. I’ll give you one though. I leave you with Let It Go!

3 Comments on “You Should Be Listening To: Frozen”