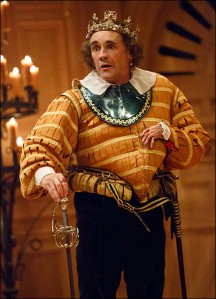 Have I mentioned Mark Rylance is amazing?

On January 2nd during snowstorm Hercules, I sat in the Belasco Theatre once more to see Twelfth Night‘s counterpart, Richard III – the other all-male Shakespeare production playing in rep until February 16th. For my Twelfth Night review and more details of Mark Rylance’s brilliance, click here.

What’s fantastic about Rylance’s Richard III is the way he draws in the audience, the way he shares his secrets with us. He confides in us from the opening moments, and we therefore root for him. We cheer him on throughout his bloody tirades, and we laugh with him as he manipulates everyone around him. We feel smarter and superior alongside him because we are “in the know.” We root for him until he no longer roots for himself. As Richard loses his swagger and falls into a kind of guilty despair (or insanity), we are left wondering what happened to the man who once strutted across the stage with such confidence and vigor. The other noticeable trait of this Richard is his sincerity with his fellow characters. In this brief New York Magazine interview, Rylance talks about not playing the obvious evil or falsehood that is largely associated with Richard but rather being as genuine as possible when in the company of others. Why make the other characters fools? Instead they can fully trust this man right up until he betrays them. What it comes down to is that you should go see anything Mark Rylance does. Anything.

That said, I will say that this production didn’t strike me the way Twelfth Night did. I found myself conscious of the staging/blocking in a way that never even crossed my mind during the ever-flowing Twelfth. And Richard may be five minutes shorter, but it felt longer. It drags more than I’d like, and I was so angry with myself for being bored. Note: this mostly happened whenever Rylance left the stage.

I also wanted much more from Lady Anne (the actor doubles as Sebastian). He felt very one-note to me, particular during his big scene with Richard. Now, this is an epically hard scene, and anyone who has ever played the role, whether in acting class or a full production, knows the challenges it brings. Anne is grieving at her father-in-law’s funeral when she is approached by Richard who killed both her father-in-law and her husband. Over the course of a five-minute scene, Dick convinces her to marry him (!). It’s insane to play. She has to journey through so many emotions to get to this point: hatred, disgust, betrayal, desperation, surrender, love, [insert additional acting choice here]. But this Anne yelled for most of the scene, and I was quite disappointed.

Samuel Barnett as Queen Elizabeth, on the other hand, once again impressed me. I very much enjoyed his Viola in Twelfth, and I loved seeing him play a statuesque queen this time around. There is an extremely challenging scene in Act II between Elizabeth and Richard, and it was so fantastic. The verbal swordplay and push and pull between these two actors was simply enticing. Elizabeth is an excellent match for Richard, perhaps the only real match to his wit, and Richard knows it. In their final exchange, Elizabeth stole the power back, and upon her exit, the audience cheered for her. And ohhh man, the look we got from Richard was unreal. He stared out at us with eyes of daggers, and it was clear we were no longer his friends. In fact, we may be next on his list.