← The Understudy Promotional Shoot
What’s It All About? Bacharach Reimagined → 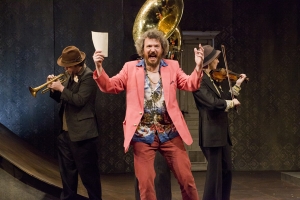 Yes! I have gone to see yet another production of Twelfth Night. And each one is more inventive than the last. It’s such a pleasure to still be continuously surprised by a piece I know so well and that another version can still be filled with new jokes, new deliveries, and new character interpretations. This was the first time I got to see a show by Philadelphia-based Pig Iron Theatre Company, and if you’re able to get downtown to the Abrons Art Center before it closes on February 23rd, I do recommend it for a jolly good time.

It’s super inventive, the actors are charming, and it is particularly fun to see it done in such a non-traditional way after viewing the Broadway production a few months ago. One of the highlights is definitely the set which is a character in itself. A half of a half-pipe (a quarter-pipe?) dominates stage right (of which the actors take full comic advantage) with a balcony above and a cellar beneath where the band hangs out drinking with Sir Toby Belch and Andrew Aguecheek. The Balkan brass band, by the way, is great, and they are well integrated into the story, not just hiding in the cellar but often becoming the focus of the action, bringing their own brand of humor to further enhance scenes.

It was a joy to see new interpretations of well-loved characters. From the opening moments, the deliciously melodramatic and lovesick Duke Orisno (Dito van Reigersberg) had me rolling with laughter. The same goes for the lanky Sir Toby (James Sugg) whose physical comedy knows no bounds, and it’s so much fun to watch Olivia (Birgit Huppuch) lose control as she quickly falls head over heels for Cesario, who is actually Viola disguised as a man (Kristen Sieh). Something that really struck me was Viola’s reaction to seeing Olivia for the first time once her veil is lifted. It shed new light on that moment and that scene for me, this idea of Viola seeing her competition for the Duke’s love for the first time and having to listen to Olivia shun him over and over. This was played out much more emotionally than I’ve ever seen it portrayed, and I appreciated the depth found in the scene.

Now I’ll be honest, the show didn’t completely blow my mind across the board. Several parts are slow, and the ending didn’t thrill me. It lacked the weight I think is needed for the end of Twelfth Night. I feel like the audience missed the tragedy of Malvolio’s story. He continued to be made a mockery through his final moments. And there is a heaviness that lies in the last scene with the abrupt ending to Toby and Andrew’s friendship that I felt was missing. I also prefer productions that push the subtext a little more of the Duke being drawn to Cesario over the course of the play. This was something I particularly loved about Mark Rylance’s production. But true, it is up to director interpretation how to best handle the sudden shift the Duke has when he proposes to Viola in the end. I personally prefer hints throughout in order to build to that ridiculous moment.

But all that aside, if you want to see an incredibly creative, fun production of this Shakespeare romp (and can’t afford Broadway), definitely get down to Grand Street for a grand ol’ time.