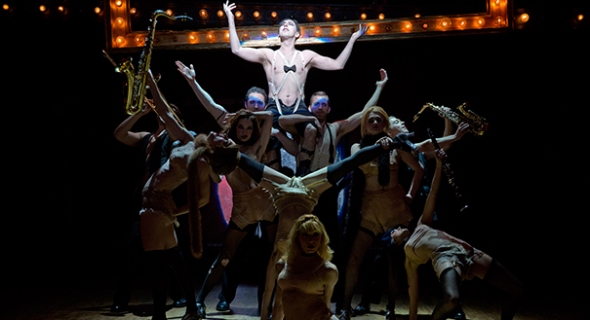 Last Thursday, I was fortunate enough to attend the opening night of the revival of Cabaret. And when I say revival, I mean that in the most literal way possible. As you may already know, Roundabout Theatre Company has remounted the Sam Mendes production that opened in 1998 and ran until 2004 (starring the late Natasha Richardson). Sadly, I missed it the first time around. Originally I had questioned the choice of putting up the same show. In my book, the point of producing a revival is to revisit a classic in a new way, to find a different angle. But boy, am I glad they did so I could see it now. It’s rare to get that kind of opportunity. Cabaret is back and once again it’s starring Tony-winner Alan Cumming as the Emcee, and together they are tearing it up at Studio 54.

Cabaret itself isn’t a flawless show – it’s long and certainly drags on in parts. There are a few songs that don’t need to be there (the pineapple song anyone?). Although you could argue that every seemingly unnecessary number contributes to the story as a whole. Every piece has a place in the puzzle – pieces that slowly build (or more appropriately, collapse) the world around us. For example, the songs Fraulein Schneider and Herr Schultz share aren’t particularly strong, but we need them in order to grow close to these characters and care about their relationship, so we can be even more distraught when things come crashing down.

It’s remarkable to me that a musical I’m so familiar with (Oh! How nice of you to ask – I was in it my senior year of college) can still be so chilling. Like the first time a swastika is revealed, you can practically hear the silent gasp emanating from the audience. And even though I know it’s coming, it’s still a punch in the gut. The same goes for “If You Could See Her (The Gorilla Song),” and basically, let’s be honest, the entirety of Act Two. It’s a one-two punch, over and over again. The fun, crazy world that is initially created is shattered as reality sinks in. That’s the beauty of Cabaret. It’s enough to make you almost forget what’s coming. It’s all fun and games with the Emcee, but the moment the kick line kicks into a goose step, we know there’s no going back.

All of the supporting characters are also excellent, particularly the Kit Kat Club dancers, Fraulein Kost (Gayle Rankin), and the newly Tony-nominated Fraulein Schneider and Herr Schultz (played by Linda Emond and Danny Burstein, respectively). And even though the critics can’t agree, I will vouch for Michelle Williams. She impressed me. I’m not sure how I feel about her take on the character (although this could very well be a director’s call). Sally Bowles is larger than life, especially in Act I, and Michelle’s Sally is much more reserved and fragile. I think that fragility should be bubbling under the surface but not necessarily for the entire story. That fear and heaviness seems to be there from the start, rather than the somewhat-oblivious, party-loving girl. Still, it was interesting to see something new. And her performance of “Cabaret” is extremely powerful. I bet her performance as a whole will only get stronger and stronger as she gets more comfortable on stage.

All in all, I give Cabaret two thumbs-up. You should definitely try to see it, especially if you missed the last revival. And even if you didn’t, why not get chills all over again?