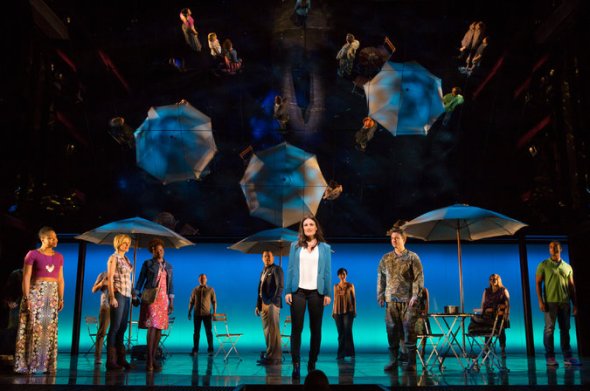 So any excitement I initially had for If/Then had mostly been diminished by the time I got to the show due to the mixed reviews and word of mouth saying it was confusing and hard to follow. But what can I say? I enjoyed myself regardless (check out the highlight reel here). The new musical is certainly not perfect. It’s a little all over the place. I could have done without the choreography. Characters are underwritten. There are a few too many moving parts if you will, but it does have a lot going for it.

Idina Menzel is a powerhouse. Say what you will about her TV performances; she belongs on that stage and subsequently brings the house down. She’s famous, folks. The rest of the cast is amazing, talented, and sadly under-used. LaChanze gets her chance to shine as does Anthony Rapp (who, I must say, has never sounded better), but Jenn Colella’s character doesn’t get the chance to develop. Same with Jerry Dixon, Jason Tam, or even the male lead James Snyder. It’s Menzel’s story through and through. The rest of the characters tend to just circle around her.

So If/Then is about Elizabeth. She’s nearing 40 and having just gone through a divorce out in Arizona, is moving back to New York City to start her life over. What’s holding her back is her tendency to overanalyze all her decisions – playing out all the possible results of every possible action – therefore making her hesitate over every little thing, from huge life decisions to how to spend her afternoon. The big convention of this musical is that one of these smaller decisions ends up splitting her life in two, and we get to see how the two sides of the coin play out, prompting the question: how can one seemingly unimportant decision potentially affect the rest of our lives?

As a result of this setup, many people have said the plot is difficult to follow, or they didn’t realize that two different stories were being told. I honestly didn’t think it was that challenging. True, I went in knowing it was going to happen, but even so, I think it’s spelled out quite clearly in the first number. And then they set up blatant clues as to which “timeline” you’re in – it’s either Liz wearing glasses or Beth without. It’s “Sliding Doors” the musical, as Laura Benanti says. Side note: I’ve also been calling it “RENT 2: Mortgage.” It’s fun to see Anthony and Idina together again. There’s a scene where they talk about how the term “squatting” is dated, and that gets quite the laugh from RENT fans in the house.

The score is the thing. I’ve had the cast recording on repeat on Spotify for weeks. If you don’t know Tom Kitt and Brian Yorkey, they won the Tony for Next to Normal. These guys know how to write a score. Here are a few sample songs of theirs: Some Other Me, Superboy and the Invisible Girl, and the Next to Normal Tony performance of “You Don’t Know” / “I Am the One.” A couple weeks ago the If/Then cast recording debuted at No. 19 on the Billboard charts. A Broadway show hasn’t done that since 1996. You may have heard of it; it was a little show called RENT.

I won’t talk about how the storylines play out or what ends up happening. I will say that I think the show deserved a little more acknowledgement than it received. Although it’s flawed, and I honestly would recommend seeing other shows first, the fact that it’s a brand new musical should be supported and recognized.