← Video Friday: It All Fades Away
You Can’t Take It With You →

Scenes From a Marriage 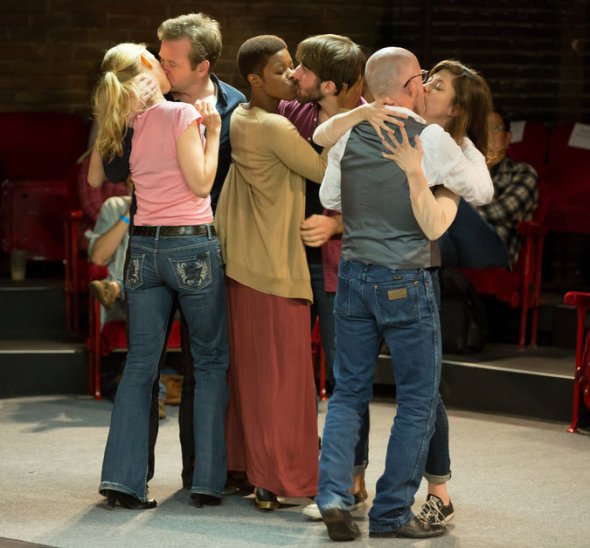 What a fascinating, innovative, different type of play experience. Of course, I’d expect no less from an Ivo van Hove production. The Flemish director often revisits New York Theatre Workshop to reinvent plays as we’ve come to know them. When I saw Hedda Gabler starring Elizabeth Marvel in 2004, it completely changed my view of theatre. He’s also directed A Streetcar Named Desire, The Misanthrope, and The Little Foxes there. Ivo strips plays down to the characters’ most primitive instincts and then heightens them all over again, leaving you with a very different approach than the original you had come to expect. Scenes From a Marriage is his newest project, based on the 1973 Ingmar Bergman TV mini-series.

As the title hints, we bear witness to different scenes from the same marriage. During Act I, the stage is split into three separate sections. When you arrive for the show, you’re given a colored wristband determining which room you enter first. Within the three rooms are three different sets of actors playing the same couple, Johan and Marianne, at different stages of their marriage, from its more promising beginnings to later struggles. In the first room, timeline-wise, are Alex Hurt and Susannah Flood, 10 years into their marriage. A half hour later you move into the next room to see Dallas Roberts and Roslyn Ruff playing the same couple later on, and lastly are Arliss Howard and Tina Benko working through the remains at the end. Meanwhile, the scene(s) you already watched are replaying beyond the thin walls. You can hear the fights, ones you’re familiar with and ones you have yet to hear – the echoes of past and future battles that resonate throughout the story.

The majority of the second act is absolutely thrilling. The theatre is transformed into one large open space, and as the six actors enter (together this time), the audience begins to prep itself for the roller coaster ride they expect is coming. The scene begins as the characters alternate lines, and soon the three pairs begin doing the same scene at once, overlapping and moving about the entire space. Three different interpretations, three different deliveries, all happening at the same time. It requires active listening from both the audience and the actors. I sat on the edge of my seat, eyes darting back and forth, catching key phrases here and there, and latching on for dear life. Hearing the same scene layered on top of itself made the words more vibrant and charged.

Despite this intense engagement, I did struggle with the latter half of Act II as my attention wavered (there were dips in Act I as well). I should note here that the play is three and a half hours long (including a 30-minute intermission). It doesn’t feel that long, but certain scenes weren’t as engrossing for me. Although this may have been because they were such a stark contrast to the times when there was so much going on. It was an odd thing bouncing back and forth between being overly engaged to not totally present. The play is well acted, but I was most partial to Susannah Flood’s performance as Marianne 1. She is moving, spontaneous, and a joy to watch.

To sum up, if you’re interested in seeing a piece of theatre that will challenge you to listen and work your brain, I do recommend Scenes From a Marriage. If nothing else, it’s always a good idea to be introduced to Ivo van Hove’s approach to theatre.