← You Should Be Listening To: Serial
Video Friday: Glitter and Be Gay → 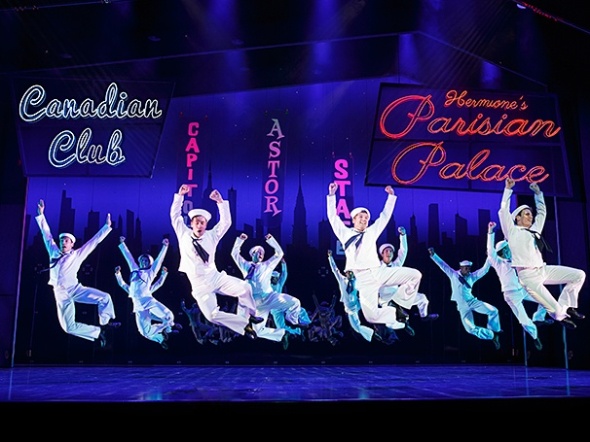 Fantastic dancing and a bright, talented cast make this one helluva revival.

For those of you out there who say you don’t know On the Town at all, I guarantee that you know at least one song. Originally produced on Broadway in 1944, it was also made into a film starring Gene Kelly and Frank Sinatra later that decade. The story doesn’t go far below the surface. It’s about three sailors trying to get laid during their 24-hour shore leave in New York City. Yup. That’s the Leonard Bernstein musical in a nutshell. But for an old-timey classic, it’s dirtier than you might expect, packed with innuendos and euphemisms.

It’s a funny thing about revivals. When a new show comes out, most of the reviews are about the content – the quality of the book and music. With something this old-school, no one is commenting on the quality of the show itself; instead it’s about the production. How the material is approached this time around. And when you’ve got John Rando at the helm (Tony winner for Urinetown), you know you’re in good hands. The production value is fantastic, the choreography stunning, plus a funky design, and an awesomely talented cast.

On the Town was the first production I was cast in at Muhlenberg; my sophomore year I played…wait for it…the Little Old Lady. She’s literally a running gag, randomly running across the stage throughout the show. The always-funny Jackie Hoffman doubles as the Old Lady and Madame Dilly (actually she pops up as other random characters, too). The focus, though, is on the six stars (the main sailors and their respective matches), and they all get a chance in the spotlight. Tony Yazbeck as Gabey is such a beautiful dancer to watch. His Tulsa really struck me in the Gypsy revival as well. Jay Armstrong Johnson’s Chip is goofy and lovable, and Clyde Alves as Ozzie never runs out of energy. Megan Fairchild plays Ivy with simple grace, and her big dance sequence with Yazbeck in the second act is wonderful. I love Elizabeth Stanley in everything, and she doesn’t disappoint as Claire de Loone. And this was my first introduction to Alysha Umphress as Hildy; that girl’s got pipes (here she is singing I Can Cook, Too).

So why see On the Town now? In the current decade? Matt and I debated this on the ride home. It’s a return to a simpler time for sure. Escapism at heart, right? Musicals today tend to make you think more (or at the very least, Sondheim intellectualized some of them). While escapism, fluff, bubblegum (whatever you want to call it) still come and go on the Broadway stage, there certainly aren’t contemporary shows with dancing like this anymore. We were trying to think of a modern musical that has full-on dance (maybe Thoroughly Modern Millie comes close?). Sure, there are dance numbers/breaks, but songs fully dedicated to dance are few and far between. You’ll typically only see that in revivals like Anything Goes, The Music Man, 42nd Street, etc. On the Town provides the eight-minute long dance sequences we’ve been missing, and this revival doesn’t flounder in that department. It features beautiful pas de deux and ensemble work (highlights here). The choreography and execution are gorgeous in this production and one of the best reasons to go see it. And it’s not just the ensemble – this is a show in which the principles have to be real dancers as well. You know it’s a legit dance show when the lead woman is New York City Ballet’s #1 ballerina.

So yes, it may be a random, at times senseless plot (with some objectifying of both genders thrown into the mix for good measure), but for a great Greene/Comden/Bernstein throwback, classic show tunes, and beautiful dancing, I say it’s worth a trip to go get Carried Away.

On the Town
Music and Lyrics by Leonard Bernstein, Book and Lyrics by Betty Comden and Adolph Green, Directed by John Rando
Lyric Theatre, Open-ended
Photo Credit: Joan Marcus
Pictured: The Cast of On the Town