If You Can’t Take It With You didn’t secure Annaleigh Ashford as one of the best physical comedians out there right now, Sylvia certainly does. I might even venture to say that she’s my generation’s Carol Burnett. It could be too soon to tell, but here’s what I know: every gesture, each sound emitted, and even the slightest tilt of her head is jam packed with comedy gold.

Fresh off her Tony win, the star is back on stage with the first Broadway production of A.R. Gurney’s Sylvia, playing the title character. For those of you who are not familiar with the play, now would be the time to mention that the title character is also a dog. Sylvia is about a love triangle but not your average one. A man named Greg (Matthew Broderick) finds a stray dog in the park (Ashford) and brings her home, much to the dismay of his wife, Kate (Julie White). Robert Sella also stars, covering several roles, each one funnier than the last. The twist of Gurney’s comedy is that Sylvia can talk. Well, not in the sense of, “Oh! A talking dog!” Rather, she has conversations with people, but they’re not necessarily communicating. She is still a dog after all. When she barks, she says, “Hey.” “Hey! Hey! Hey!” The fact that this remains laugh-out-loud funny throughout the play is impressive. It’s hard to describe why it’s so amusing to see a human behaving like a dog. As Greg finds himself going through a mid-life crisis and Kate finds her marriage falling apart before her very eyes due to the furry arrival, Sylvia is hoping to find a permanent home on the couch.

Broderick is his usual self on stage. Just like in It’s Only a Play, I was quickly bored with his flat inflection. Every line sounds the same, and he looks stiff as a board up there, especially next to Ashford who’s jumping around and running and scratching and hey-ing. (Fun fact: Sarah Jessica Parker, Broderick’s wife, played Sylvia in the Off-Broadway 1995 premiere.) Julie White, in what could be a one-note role as the aggravated wife, is delicious as usual. And Sella, whose work I was unfamiliar with, was delightful to watch transform as he fills in the edges of the small ensemble.

My opinion on the play itself keeps shifting as I work on this post. Some days I think it is paper thin with the same gimmick over and over, but fortunately in this production, Annaleigh is so skillful that it doesn’t get old. On the other hand, the play is pretty darn cute, and it made me miss my old pup, Kirby (below). It may be a simple story, but it is about something real: the love between people and their dogs. 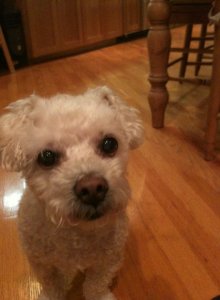