Late to the Party; Or, Dear God, Why Haven’t I Seen Hamilton Yet? 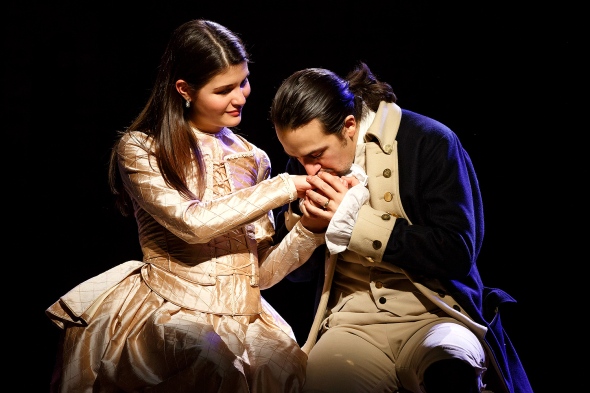 I really messed up on this one, friends. That’s right, I STILL haven’t seen Hamilton. I’ve never been so behind the times.

For the people out there who, as they say, might be living under a rock (or maybe they’re just not on social media), Hamilton is the new Broadway musical that’s currently taking over the world. Lin-Manuel Miranda, a Tony winner for In the Heights in 2008, has teamed up again with Director Tommy Kail and a million other crazy talented people to tell the story of Alexander Hamilton through hip hop and rap music. Perhaps you saw the scoop on “60 Minutes.” Or Miranda freestyling on the Tonight Show two weeks ago. Or heard about the education initiative in which 20,000 high school students will get to see the show for $10 each. Or seen some of the amazing mini-performances at the #Ham4Ham lottery. Or know that POTUS and FLOTUS have both seen the show (twice).

Listen, let me explain myself. I had planned on seeing it when it was Off-Broadway at The Public earlier this year, but the prices were so steep (the irony, I know) that I decided to wait until a discount became available. Then the reviews hit, and the show blew up. I knew it was going to be big – I didn’t know it was going to be a cultural phenomenon. Anyway, I felt that a post explaining myself was necessary since anyone and everyone is talking Hamilton, and it has yet to be mentioned on this blog.

This thing has been on my radar since Miranda’s first performance of a song at the White House in 2009. I was always excited because I was a super Heights fan. Back when I worked at Marquee Merchandise, the spring of 2008, we jammed out to the cast recording every day, learning all the rhymes as we charged credit cards, packaged, labeled, and mailed stacks upon stacks of pre-ordered CDs. Ah, memories. Whenever I had a spare evening that year or found myself wandering around Times Square around 9pm, I would swing by the Richard Rodgers theatre to check on the merch sellers, but really it was so I could go stand in the back of the orchestra and watch select scenes. I loved having a Broadway show on-call like that. I could go whenever I wanted. Need a little “96,000” in my life? Or “Champagne?” Want to see how Corbin Bleu is doing? I felt like the Richard Rodgers was mine. I also was watching this video on repeat at the time.

So when Hamilton hit the scene, I was ready – just not ready enough apparently. I waited on that ticket and then missed the boat. All this to say, I dropped a chunk of change (way more than it would have been at the Public, whoops) and bought my ticket a few months ago. I probably could have gotten a seat in the back and seen it by now, but for that kind of money, I wanted a SEAT, you know? December 17th it is. I will wait impatiently until that day and continue to avoid the cast recording that I so desperately want to hear.

Thus, let the one-month countdown begin. Then we can discuss.