The Humans: A Hilarious and Haunting Family Portrait 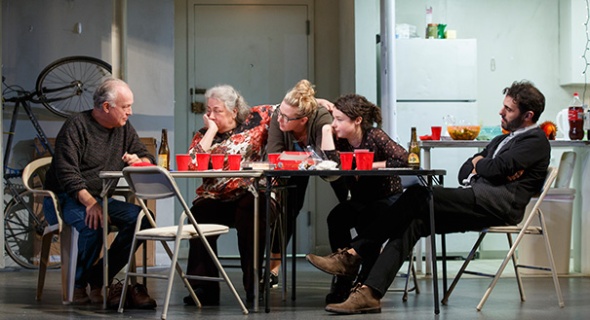 This, y’all. What a well-made play. A Roundabout Theatre Company production currently running at the Laura Pels, and now expected to transfer to Broadway in the spring, The Humans is a new play by Stephen Karam, whose play Sons of the Prophet (a 2012 Pulitzer Prize finalist) was also staged at the Roundabout back in 2011.

Thanks to the fantastic direction by Joe Mantello (you can always count on him) and an extremely strong cast, everything about this piece feels so…real. That’s the only word I can think of to describe it. Time and time again, I keep coming back to that one – real.

First let me give you some context. The Blake family has gathered together for Thanksgiving dinner, this year at their younger daughter’s new apartment in lower Manhattan. Brigid has moved in with her older boyfriend, Rich, and the place isn’t bad by New York standards. It’s a ground floor apartment, and they have a second floor in the basement of the building, both fully executed by set designer David Zinn (see photo below). Sure, there are bars on the windows, and the trash compactor is crazy loud, and who knows what the hell the neighbors are doing upstairs, but hey, it’s home! They’ve just moved in, and their stuff hasn’t made it to the apartment yet, so it’s a very bare bones Thanksgiving, adding to the creepiness vibe of the place as the thumps get louder and louder upstairs. Brigid’s older sister Aimee is there, and their parents, Erik and Deirdre, have trekked in from Pennsylvania with their grandmother “Momo” who is suffering from the beginnings of dementia. The evening is full of prepping for dinner, exchanging gifts, complaining about the noise, and getting to know the boyfriend (watch a clip here). Because it’s a play (and we all know how plays work), we can guess from the start that this isn’t going to be the smoothest of family dinners, but the way in which the plot unfolds is so seamless that it doesn’t feel the least bit contrived. Nothing in the entire 90 minutes seems false or forced. Things unravel like a sweater as old reflexes kick in, snide comments are exchanged, and secrets are revealed.

Whatever these actors did to prep for these roles worked. It’s as if they really grew up together in the same home. The dynamic of each relationship has been so well developed. As tensions rise and fall, each character alternates taking on the role of mediator or instigator. It’s so familiar it’s almost like watching your own family up there – maybe not the same relationships or secrets but in the way they speak to each other. The history between them is just as strong as what’s being said in the moment. Whenever Brigid makes a rude comment toward her mother, I didn’t sit there thinking, “She’s a mean person.” Rather I saw the layers of their relationship and understood that they have a history to which we are not privy. We may not get the whole story in this play, but we know it’s there, and the actors definitely know it. AH – all of them are so good! I don’t feel the need for other adjectives! All I’ve got is GOOD and REAL.

Oh, also, don’t let me give the impression that this is a heavy, all-intense family drama. That’s definitely part of it, especially as we build to the haunting climax, but this play is crazy funny. Other things I loved? It’s told in real time. The characters overlap and interrupt each other the way people really talk. They overhear one another’s conversations, but it doesn’t feel like a convention. We are truly flies on the wall witnessing raw, real moments between family members as they snap at each other and love one another hard. The Humans is so relatable it’s painful at times, and when I wasn’t laughing, I was struck by the inner workings of this family. I found myself continuously surprised as other elements were looped in toward the end of the play, even moments of pure terror. And when the lights went out, my hair was standing on end. 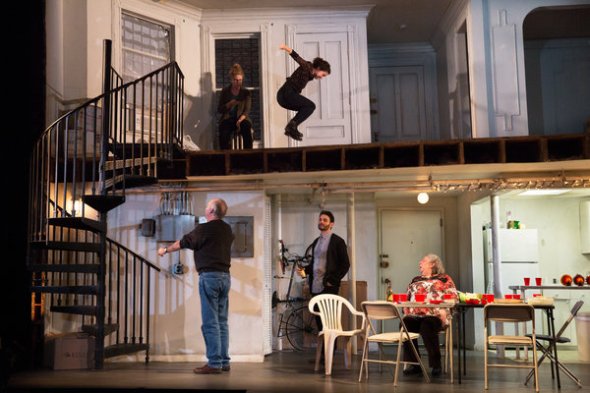 You Should Be Listening To: Serial

Looking for your next show to binge-watch? How about a binge-listen?

We’re venturing into new territory here on Becca on Broadway: the land of podcasts. I’m pretty new to the experience, having only been introduced in September, but now I cannot get enough. Today we focus on one in particular.

If you’re a regular podcast listener, then you likely already know alllll about Serial, which is currently the top station. It’s a spinoff of This American Life, the popular public radio show hosted by Ira Glass. Each episode of TAL has a theme and is typically split into three acts as we hear different peoples’ stories (it was also a television series on Showtime back in 2006). Serial began in September, coincidentally right after I started subscribing to the podcast world. Sarah Koenig, a journalist and producer of TAL, is the host and executive producer. The primary difference between the two podcasts is that Serial focuses on one nonfiction story over the course of the whole season, each episode diving deeper and deeper into the details. There have been nine so far, ranging from 30-45 minutes each (it’s still TBD how many episodes there will be).

This first season is about a murder case from 1999. A Baltimore high schooler named Hae Min Lee was strangled, and her ex-boyfriend, Adnan Syed, was arrested, convicted, and sentenced to life in prison not long after her body was found. Fifteen years later, Adnan is an inmate at a Maryland correctional facility. But when we start to look into the case against him, it’s not the most clear-cut. Between the conflicting testimonies, confusing phone records, and lack of follow-through on examining the evidence, how sure are we that Adnan was rightfully convicted of this crime?

Not to say that’s all the podcast is about. Sarah Koenig isn’t just trying to prove Adnan’s innocence. He very well may be guilty (many listeners firmly believe he is), but either way, Sarah ultimately wants to get to the bottom of it. So she starts from scratch and is now reviewing the case piece by piece all these years later. This leads to many new mysteries as she interviews friends, family, and witnesses from the winter of 1999 – kids who are now grown adults. We also get to know Adnan, as Sarah has weekly phone conversations with him in prison.

Honestly, no matter what I say it won’t begin to cover how compelling this story is. I don’t know how they do it, but every episode is better than the last. Listeners are incredibly invested in this case, and it’s actually easy to forget sometimes that it’s real life. These are not characters in a movie. This isn’t a mystery novel. This is a tragedy that really happened which took one girl’s life and forever shaped her classmates’ futures. Episodes cover all kinds of emotions. I’ve had friends text me about crying on the subway as they listen. I’m pretty sure I often look stunned, with my mouth hanging open, as I listen on my commute.

Along with the captivating evidence reveals, testimonies, and recordings from the trials, Sarah is also a fantastic host. She’s riveting and relatable. We are going along on this journey with her, and she is just as stumped as we are. Her delivery is calming and smart, and she asks all the right questions (although the parody that’s going around right now is hilarious and a pretty spot-on impression of her intonation). While we’re on the topic actually, for you fans out there, I also suggest checking out these great charts (thanks for sharing, Dina!).

Want more reasons to listen? The theme music. The editing. The pacing. And the MailChimp ad at the beginning which somehow we’ve all grown to love and look forward to every Thursday morning.

So here is your assignment:
1) Install the Podcast app on your phone.
2) Subscribe to Serial.
3) Download the episodes.
4) Start with Episode 1: The Alibi (note: you definitely want to start at the beginning.).

They’re off this week due to Thanksgiving so it’s the perfect time to start catching up. Go with my blessing, friends. Give thanks, and binge!