← Honeymoon in Vegas
It’s Gonna Be a Happy New Year! →

Into the Woods: The Movie 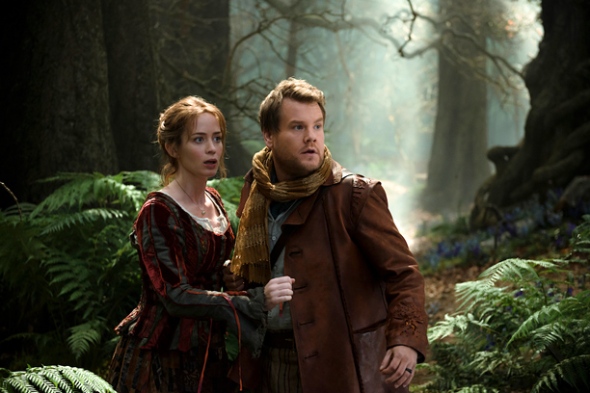 Let’s talk Into the Woods, shall we?

First, some history about this show and me; I feel it’s important that you know where I’m coming from. I grew up watching Into the Woods. If you don’t know the story, the Stephen Sondheim musical puts all of our favorite fairytale characters in the same world and shows us what happens after “happily ever after.” As I mentioned in my last Video Friday, the 1987 original production was filmed live and aired on TV in 1991. My parents, in one of their wisest decisions ever, taped it, and I wore that VHS tape to bits. The video quality was so bad that when the DVD was released, I remember watching it for the first time thinking, “Woah, Bernadette’s dress is PURPLE!” If there’s one thing I’ve seen more than anything else in my 30 and a half years on this planet, it’s this stage version.

When the Rob Marshall film was announced, I tried to remain as neutral as possible, not wanting to get my hopes up. But over the past few months, the more clips and interviews I saw, the more excited I got – I couldn’t help myself! It actually looked like they were going to do it justice. There are many reasons why it’s exciting to put a musical (or any play for that matter) on film. It’s an opportunity to do things on screen that are too difficult or expensive to execute on stage. Into the Woods is a great example of the possibilities that open up once you are allotted a Disney budget: a 64-piece orchestra, a stunning forest, a real palace, a real COW, etc.

Okay, enough stalling – let’s get to the heart of the matter. Bottom line? I loved it. There, I said it. They did a damn fine job. It looks and sounds beautiful, and I already went back to see it a second time with my friend Little Red. A lot of the success relies on the cast, and they knock it out of the park. Two years ago upon the release of Les Misérables, many complained (myself included) about some of the casting. I love Eddie Redmayne, but there are better singers out there for Marius. Objectively speaking, Amanda Seyfried and Russell Crowe don’t have the same vocal talent as Hugh Jackman and Aaron Tveit. These key casting mistakes hurt the movie, but Marshall gets it right with Woods. There’s talent across the board. I’ll highlight a few of my favorites (please note: I am intentionally not going to talk about Johnny Depp because I truly do not know how I feel about that wolf).

If I hadn’t previously heard Chris Pine sing on Jimmy Kimmel Live, I might have thought his voice was dubbed. Who would’ve guessed that man could croon? He’s so brilliantly cast as Cinderella’s Prince, with that fine-looking coif and just as fine-looking a face, and gives a perfectly balanced over-the-top performance. “Agony” is one of those songs that can crash and burn if you don’t have the right actors. Pine, and Billy Magnussen as Rapunzel’s Prince (Spike of Vanya and Sonia and Masha and Spike), had me laughing up a storm.

I’ve learned recently that there are people who don’t like Anna Kendrick (Cinderella). I did not know this was possible! I think she’s great in everything, and this was no exception. “On the Steps of the Palace” is excellent. Period. I adore the changes they made to this song: tweaking the lyrics to present tense and first person, stopping time as Cinderella sifts through her options, and putting her literally on the steps of the palace. These adjustments make the song more active and packed with discoveries. I also enjoy seeing Cinderella choose to deliberately leave the slipper behind.

I love seeing actual kids in the roles of Jack (Daniel Huttlestone) and Little Red Riding Hood (Lilla Crawford). More often than not, on stage you’ll see actors in their 20s, or even 30s, who “look young” playing these parts. Having children play children, especially in a musical about children, brings a whole new level to the piece. “Your Fault” becomes more pointed when you see adults arguing with little kids about who’s to blame. Little Red’s dare to Jack holds more weight because dares mean more at that age. “No One is Alone” resonates all the more when you see young children who’ve lost loved ones.

I’m on such an Emily Blunt kick right now. Gosh, I love her. And she’s damn good in this. It’s hard to take on a role iconized by Joanna Gleason in my book, but she makes it her own and is a joy to watch. She and James Corden play off of each other well, and they’re a pair you want to root for (“It Takes Two” = adorable). Side bar (SPOILER): I appreciate the extra emphasis placed on the Baker’s Wife’s interest in Cinderella’s Prince. There are multiple hints in the script that she’s drawn to him, but on stage, I’ve only seen them delivered as punch lines or portrayed as a surface attraction. Blunt’s interpretation felt like a legit, tangible fantasy of hers, making it more believable that when he’s wooing her later on, she caves.

Do we even need to talk about Meryl? I mean, really. The woman is unstoppable. The bitch can skate. Moving on…

On to my negative feedback (SPOILER alert for the next three paragraphs). My major critique has to do with the shifts in mood in the second half. There was much concern leading up to the opening of this movie that the musical would be “Disneyfied” (although, you could argue that other Disney films are just as dark – how many protagonists actually have two living parents?). Regardless, people feared that Disney would suck the darkness out of these doomed fairytale characters. After seeing it, I would say that yes, it is not as dark as the live show, but it was not nearly as “Disneyfied” as it could have been.

One of the reasons the “second act” isn’t as bleak is the off-screen deaths. The punch to the gut is less effective when these deaths are merely suggested. For example, I genuinely did not know whether or not Jack’s Mother died. In the original version, it’s a much more deliberate strike by the Prince’s Steward, and we witness her last words. Now she’s awkwardly pushed, and her death is only implied. As a result, I did not head into the next scene with the same heaviness I typically feel. On stage, when we first meet the Giant in person, the Narrator (who has been cut from the film), Rapunzel, and Jack’s Mother all die within five minutes of each other. It’s traumatic, overwhelming, and happens so quickly that we barely have time to register it all. Now that the Narrator is gone, Rapunzel doesn’t die, and Jack’s Mother’s death is unclear, I found myself taking the dramatic turns less seriously.

The change I can’t support, and my biggest problem with the film, is the end of Rapunzel’s story. It is a mistake to let her live. Her death is crucial for the weight of the second act, particularly the Witch’s arc. Her “Lament” is not about Rapunzel running off with the Prince (which is typically at the end of Act 1); it’s about real loss. The Giant steps on Rapunzel right in front of her mother’s eyes. This tragic loss of her daughter is what drives the Witch the remainder of the show. Why else would she be so desperate to find Jack and feed him to the Giant? Why else would she stick around with these people who make her crazy? All that exasperation builds to “The Last Midnight” when she finally explodes. The song is less earned without Rapunzel’s death. Don’t get me wrong – Meryl is fantastic and it’s a good number, but it doesn’t feel grounded without the backstory. The stakes are a lot lower when sh*t doesn’t go down.

As for the song cuts, they make sense to me. It’s a hard thing to cut a half hour from a musical. Of course I’m sad that “No More” isn’t included, and it’s odd not to have the opening of Act Two. I wish (ha) the passage of time were still there so we could see these characters wanting more all over again, even though they just got their wishes. Here is an interview with the book writer, James Lapine, in which he discusses the process of adapting the stage script to film.

I know there are upset fans who are angry about the changes, saying the movie could never top the original. To that I say, of course it wouldn’t be the original musical; that’s not the intention. The movie isn’t here to replicate the stage show – rather it’s one more interpretation of this wonderful story. It’s a chance to shine new light on it for the fans, and perhaps more importantly, for the people who’ve never had the chance to see it. I read on Playbill.com that “in its first weekend, “Into the Woods” was seen by four times the amount of people than those who saw both Broadway runs combined.” We have to treat this movie like a revival – a creative team trying something new. So as far as this attempt goes, I say, “Brava.” Brava for staying as loyal to the script as possible, casting actors who can sing, and having Lapine and Sondheim involved every step of the way.

You know, another thing I’ve noticed in reviews is an odd contradiction regarding how people feel about the latter half of the story. Like I said, fan are disappointed that it’s not as dark (I, too, lean in this direction). But then there are the people who are upset that the second part even happens, saying quit while you’re ahead. Why does it need to get dark when a perfectly good ending has already been established? Why not wrap things up at Happily Ever After?

But isn’t it more interesting to go beyond and see what’s next? Because that is when real life happens. And shouldn’t we want to sing about that, too?

Into the Woods
Music and Lyrics by Stephen Sondheim, Screenplay by James Lapine, Directed by Rob Marshall
Pictured: Emily Blunt and James Corden

4 Comments on “Into the Woods: The Movie”