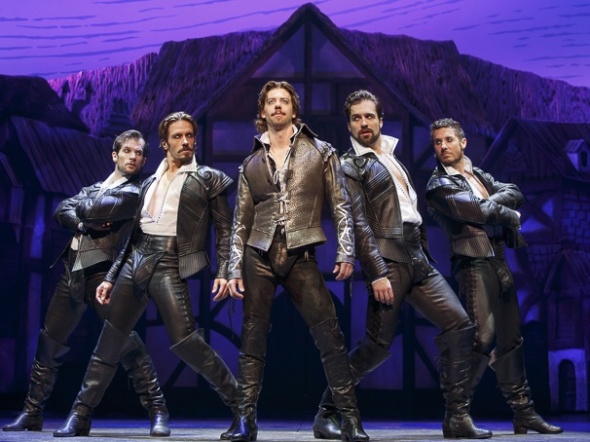 I gotta say, Something Rotten has Best Musical written all over it. Admittedly, I have yet to see most of the new musicals this season as they’re all coming out right about…now (pre-Tony time is busy, friends!). So it’s true, I might change my tune after seeing Fun Home or Finding Neverland or It Shoulda Been You. Lots of new musical potential this year (update since I wrote those last two sentences: It Shoulda and Neverland did not do too well with the critics).

But Something Rotten knows what it’s doing, and it’s got Casey Nicholaw at the helm (you can view highlights here). Now Casey and I don’t always see eye to eye. I couldn’t quite get on board with his productions of Aladdin and Elf, but then there’s the hilarious The Drowsy Chaperone and underdog The Book of Mormon. And now he’s back delivering a brand new (that’s right! NEW!), yet deliciously old-school musical full of big shtick, big comedy, and big musical numbers. And Shakespeare references!

Wait, hold up – this show is about Shakespeare? Don’t run off just yet! It’s not all uppity with super insider-y jokes (although there are plenty for the big Shakespeare fans out there). Here’s the basic premise. All the Bottom brothers, Nick (Brian D’Arcy James) and Nigel (John Cariani), want is to write a hit of their own, but they can’t get a word in edgewise because William Shakespeare (Christian Borle) is all anyone can talk about, and his new play Romeo and Juliet just premiered at the Globe. Nick will do anything to top his rival, so he goes out in search of a soothsayer (Brad Oscar) to find out what the “next big thing” might be. And what does he learn about? Why, musical theatre of course! So he dives headfirst into creating the world’s very first musical. Cut to countless hit musical references. I mean, so many you won’t catch all of them in one viewing.

Now sure, there are some easy jokes that drove me a little crazy (a woman guarantees there will be gender equality in no more than five years – get it?!), but on the whole, it’s a silly ball of fun. I don’t know the last time I laughed that hard at a musical. The score is packed with catchy tunes that you will actually leave the theatre humming. And to top it off, you have the impeccably talented cast.

Led by D’Arcy James and Borle, right off the bat, you know you’re in good hands. D’Arcy James is steadfast in everything he touches. He plays a solid straight man amidst all of the craziness but still gets his chance to cut loose. As the Bard, it’s so much fun to once again see the cockiness of Black Stache mixed with the bravado of Tony winner Borle himself. Brad Oscar is insane and hilarious, and Cariani and Kate Reinders are adorably charming and funny as the young will-they-won’t-they-couple. Oh, and Heidi Blickenstaff – I could listen to her sing all day. I wish there were more to her character, but sadly it’s not her show. This is very much about the Bottom brothers and Shakespeare, and the women unfortunately are left in the sidelines. I guess that’s what happens when a show takes place in 2015 – sorry, I mean 1595.

So. A musical chockfull of Shakespeare AND musical references? It sounds like this was made for me. How can you go wrong with a musical that’s an ode to musicals? I’m eager to see what the critics will be saying after the opening tonight, but honestly? I’m not the least bit worried about this show. Nothing’s gone rotten here.

A Gentleman’s Guide to Love and Murder

What a jolly good time! What’s that you say? An entirely new musical? Original writing, choreography, a wonderful cast and director, AND a success as this year’s Tony-winning Best Musical? What a breath of fresh air. A Gentleman’s Guide to Love and Murder was the underdog of the season, despite the fantastic reviews this past fall. It simply fell in the shadow of blockbusters like Aladdin, but as the Act One Finale “The Last One You’d Expect” states, this was the musical to take home the awards this year (Best Musical, Book, Costume Design, and Direction) plus six additional Tony nominations.

Written by Robert L. Freedman (book and lyrics) and Steven Lutvak (music and lyrics – and a welcome newcomer to Broadway), Gentleman’s Guide is based on a 1907 novel by Roy Horniman. Bryce Pinkham plays the titular character, a gentleman named Monty Navarro. Monty tells his story from prison as he takes us back to how everything began – when he finds out that he is a distant relative of the royal family, the D’Ysquiths. In fact, only eight relations stand between him and the current Earl of Highhurst. Meanwhile, Jefferson Mays plays all of said relations, and after being scorned by the family, Monty begins to take them out, one by one, getting closer and closer to the Earl himself. Both men are hilarious and spot-on in their roles(sss). Monty also finds himself torn between two women, Sibella and Phoebe, played by Lisa O’Hare and Lauren Worsham respectively, who are making fantastic Broadway debuts.

To say the least, the show is a romp full of catchy, clever songs. It’s packed with mugging and “wink winks” at the audience, and it works because the jokes are solid, and the actors telling them know what they’re doing. Once your ear adjusts to the English accent, it’s pretty much non-stop laughter with comedy ranging from sly wit to full-out slapstick. To the best of my knowledge, farcical musicals are few and far between. The Mystery of Edwin Drood is the closest thing I can compare it to within the musical genre. Like Drood, this is clean and sharp. The number performed on the Tony Awards, although it seems like it’s in hyper speed taken out of context, certainly does the show justice in my book.

Another reason the show is so successful is you can tell that the cast is having a blast, too. I mean, how can you not with material like that? Murder has never been so much fun.