← Video Friday: Do You Remember?
A Disclaimer on Reviews →

A Gentleman’s Guide to Love and Murder 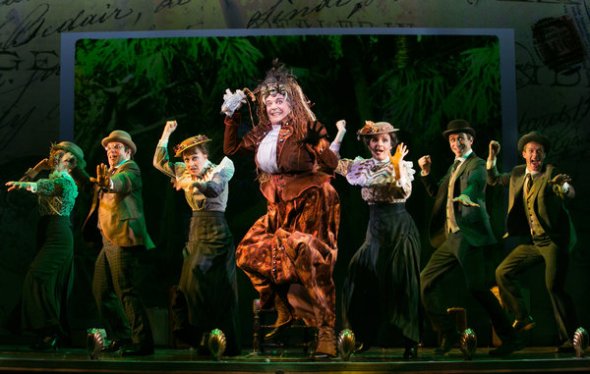 What a jolly good time! What’s that you say? An entirely new musical? Original writing, choreography, a wonderful cast and director, AND a success as this year’s Tony-winning Best Musical? What a breath of fresh air. A Gentleman’s Guide to Love and Murder was the underdog of the season, despite the fantastic reviews this past fall. It simply fell in the shadow of blockbusters like Aladdin, but as the Act One Finale “The Last One You’d Expect” states, this was the musical to take home the awards this year (Best Musical, Book, Costume Design, and Direction) plus six additional Tony nominations.

Written by Robert L. Freedman (book and lyrics) and Steven Lutvak (music and lyrics – and a welcome newcomer to Broadway), Gentleman’s Guide is based on a 1907 novel by Roy Horniman. Bryce Pinkham plays the titular character, a gentleman named Monty Navarro. Monty tells his story from prison as he takes us back to how everything began – when he finds out that he is a distant relative of the royal family, the D’Ysquiths. In fact, only eight relations stand between him and the current Earl of Highhurst. Meanwhile, Jefferson Mays plays all of said relations, and after being scorned by the family, Monty begins to take them out, one by one, getting closer and closer to the Earl himself. Both men are hilarious and spot-on in their roles(sss). Monty also finds himself torn between two women, Sibella and Phoebe, played by Lisa O’Hare and Lauren Worsham respectively, who are making fantastic Broadway debuts.

To say the least, the show is a romp full of catchy, clever songs. It’s packed with mugging and “wink winks” at the audience, and it works because the jokes are solid, and the actors telling them know what they’re doing. Once your ear adjusts to the English accent, it’s pretty much non-stop laughter with comedy ranging from sly wit to full-out slapstick. To the best of my knowledge, farcical musicals are few and far between. The Mystery of Edwin Drood is the closest thing I can compare it to within the musical genre. Like Drood, this is clean and sharp. The number performed on the Tony Awards, although it seems like it’s in hyper speed taken out of context, certainly does the show justice in my book.

Another reason the show is so successful is you can tell that the cast is having a blast, too. I mean, how can you not with material like that? Murder has never been so much fun.