You guys, my friend wrote a book. Remember Courtney Romano? She wrote a freakin’ book, and its official release is tomorrow, so indulge me for a moment if you would.

MY FRIEND WROTE A BOOK.

I’m so proud (and not just because it’s the first time I’ve been included in the Acknowledgements). I’m proud because Courtney birthed this from her very soul. She’s put her blood, sweat, and tears into this, and her story is so personal and relatable it’s as if she’s speaking directly to each individual reader.

The First Ten Years: A Philosophical and Practical Guide to Creative Longevity is just that. It’s accessible, non-condescending, meets-you-on-your-own-terms advice. Actually, scratch that. It’s not even advice. It’s meeting you in the middle to hash out the challenging, rewarding, spontaneous, impossible, beautiful parts of being an artist. Here’s part of the back cover description:

“You have something more to give” is the guiding mantra grounding Romano as she writes a timeless manifesto for creatives. The First Ten Years isn’t selling a six-point plan for success to the reader. It’s selling the reader to the reader. The isolated inner life of creatives (and all who feel the call to give something more) reflects through Romano’s theatrical ups and downs as she uses her missteps and achievements to curate an answer to the age-old question, “Will I make it?” “The Day Job Complex,” “Following Your Sadness” and “Why No One Likes a Perfectionist” are just a few sections that address the nuanced and delicate inner battles that creatives (from actors to entrepreneurs) fight when facing a blank canvas. Pulling those silent soap operas into the open exposes creative turmoil for what it is: an unnecessary block to our greatest work. Whether you’re heading out into the professional world for the first time, at a mid-career crossroads or wondering if it’s too late to start your masterpiece, The First Ten Years is the creative call to arms for anyone with that internal voice whispering, “You have something more to give.”

Somehow, Courtney has the astounding ability to find the exact right words to describe the life of a creative. Any creative. That includes accountants, lawyers, doctors. Everyone has creativity within him or her; it doesn’t need to be manifested through traditional “art.” We are all going on this journey together and individually.

I was fortunate enough to read an advance copy this past week. As I found myself bookmarking pages and highlighting quotes that struck me or were so on point that I thought the book was actually written about my life, I would remember, hey wait, Courtney wrote this. This isn’t an out-of-reach, someone-I’ll-never-meet author. These smart, inspiring words came from my friend. As it were, I’m going through a big transition in my life right now, and I feel lucky that I have this book to turn to, not to mention the author behind the words.

If you find yourself in New York City, there is a Launch Party tonight at 7pm at The Late Late in the Lower East Side (159 East Houston Street). There will be drinking and talking and awesomeness and a reading from the book by the woman of the hour. You can order the e-book now, or pre-order the paperback. I can’t wait to get that baby in my actual hands.

Follow Courtney at @courtneyromano, or keep tabs on the hashtag #thefirst10. And you can watch the book trailer here (or below). I’ll leave you with one of my favorite quotes from the book:

I can’t tell you where you should go or who you should be or what mark you will make on this world. But I can definitively tell you this:

You have something more to give.
The world is waiting for that one thing that can only come from you.
You know how to give it.

Check it out! It’s my first guest blogger! Allow me to be a little self-indulgent for a moment and share a review of The Understudy, courtesy of my dear friend, Courtney Romano. True, it’s not exactly what you’d call an unbiased opinion; nonetheless, I thought it would be nice to share. And be sure to visit Courtney’s blog for some amazingly inspiring and articulate thoughts about life, wellness, and creativity. Now I pass you off to Court…

Two disclaimers first: I personally adore every person who worked on this show, and I don’t write reviews. So why should you even keep reading? Well, that’s a good question; I can’t answer that. But why should you have seen The Understudy at The Secret Theatre this past May? Those answers I got.

This team of artistic comrades poured themselves entirely through this play. Not into it. They passed through. Theresa Rebeck wrote this funny, accurate, heartbreaking, soulful, discouraging, uplifting piece of theatre. She distilled this daily battle we call “trying to be an actor” and crafted a living organism for the stage. Now, it could have been very easy to stage the simple ideas, the easy laughs, and the common sense relationships in a piece that’s already full. They could have capped off her words nicely with a kind performance. A polite, engaging, sincere performance.

Or they could meet it with their own fullness. And that’s what they did.

Actors Becca Schneider, Brian Byus, and Craig Hanson met the play with both sophisticated containment and fantastical carbonation. They took a painfully accurate portrayal of modern show business and allowed the structure of Rebeck’s words to be their edges. Their borders. Their landmarks. But then they lived. They allowed the truthiness of her words to inflict them. They opened their real world wounds and let the pretend world seep so deep.

Now listen, I know I’m biased. I told you earlier – I love everyone involved, and I don’t write reviews (I leave that to the pros). But I know what it’s like to be transformed from sitting in a dark room and watching people tell a story. From every angle – direction, design, crew, and company – everyone’s hearts were wrapped up in these words. Does loving the work that much always make good theatre? Not a chance. But when you pair that love with indisputably smart artists, you watch a transformation. They passed through the play, letting it marinate in their bones. They stepped into and out of Rebeck’s words, letting us get close enough to the play’s damage and relief so we felt like we were right next to them the whole time. They loved through the play, and so for a little under two hours, we too felt a whole lot of love. 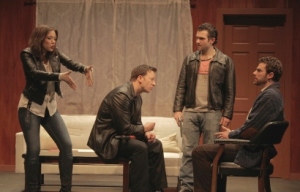 This isn’t going to be so much a review as it is a chance for me to brag about my friend, Courtney Romano, who made her Off-Broadway debut last month in a play called Philosophy for Gangsters at the Beckett Theatre at Theatre Row. I went to go see the show a second time last week. Courtney starred as Callie, a mafia princess and college graduate who leads a philosophical revolution with the help of her mob family and a kidnapped philosophy teacher from New Jersey University.

Now, the play leaves much to be desired. While a funny concept with some genuinely entertaining moments, it is very much a film script trying to be a stage play. There are so many quick “cut-to’s,” and sometimes it feels like we spend more time in scene transitions than scenes (which keeps the momentum from building). Just when a couple of characters are really starting to get to the meat and potatoes, there’s a blackout. Some scenes only last a few sentences, and then there’s a transition to jump a few minutes in time. The creators need to take advantage of the fact that we’re in the theatre. They can use stage tricks and/or set up theatrical conventions for the time jumps or even work around them entirely.

But whenever the play started to dip or wander, Courtney was there, solid, with her feet on the ground, serving as the North Star for the production. She set the example for keeping the pace and sticking to the objective at hand. If the plot started to wane, I knew I could look to Courtney who would be on track.

And on top of all that? She was still playing. She was still having fun and diving deeper into the role. I had attended opening night on February 4th, and it was great to see how much she’d developed the character over a few short weeks.

So even though the show closed on Saturday and I can’t tell you go to see it, I can tell you to keep your eyes peeled for my pal in the future.