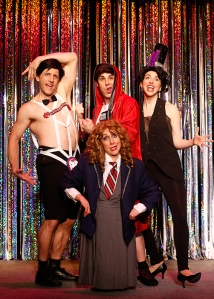 The most recent incarnation of Forbidden Broadway is once again a hodgepodge of Broadway spoofs. Conceived by Gerard Alessandrini, Forbidden Broadway has been running Off-Broadway on and off since 1982. It features two men, two women, and piano accompaniment. In no apparent order, the hits (and flops) of the current season are parodied, and other always-popular-topics are sprinkled in as well (such as Annie or Ethel Merman).

I grew up listening to a whole bunch of FB tunes that I had downloaded on Napster as a dorky Broadway-loving teen. I’ve always been obsessed with “Into the Words,” “I Couldn’t Hit the Note,” and the Les Misérables medley. My dad took me to see it for the first time eight years ago or so, and honestly, I couldn’t stand it. This new version I liked more. The performers are charming, and there are several clever spoofs with full-on laugh-out-loud moments. Some of it is really mean though; it actually made me a little uncomfortable at times. The tone shifts from poking fun or teasing the premise of a show to specifically jabbing at an actor’s talent (or lack thereof). It’s one thing to do a funny impression of Patina Miller in Pippin, but to straight up mock Laura Osnes in Cinderella? Not necessary. Or deserved for that matter.

Basically, the production, as I imagine many of them are, is hit or miss. Some of the songs are very funny, but the misses fall very flat. The best material is mostly in Act 1 – highlights including a Jason Robert Brown bit, The Bridges of Madison County parody, and Pippin. Now, it’s one thing for me to laugh, but I’m betting there were several tourists there that night who probably had not seen most of the season. What’s impressive about the show is that everyone finds it amusing, even when they haven’t seen what’s being spoofed. It’s packed with inside jokes, specific references, and impressions of not-so-famous actors from this year’s productions, and people still laugh. So these guys are doing something right. They have a formula, and they’re sticking to it. But while funny, the gimmick does get old over time. Maybe that’s why Act 2 didn’t do much for me. I say, lose the intermission, cut the weaker filler numbers, and go out with a bang instead of a whimper.

So with the Tony Awards now very much in sight, I have received a handful of requests for a “Tony Prediction” post. I’ve been hesitant to share my predictions (in print anyway), but here are a few thoughts on what to expect and why you should tune in this year.

What I’m most excited for this season is that there is not a clear winner in the works. Unlike a couple of years ago when everyone knew The Book of Mormon would sweep, or even last year with ONCE, this time around we have a true race between two new shows for Best Musical, Matilda and Kinky Boots. I have not yet seen Matilda at the Shubert, but I did get a chance to see it in London last spring, and I absolutely loved it. I saw Kinky Boots several weeks ago, and it’s like musical theatre candy; the audience eats it up. Personally I’m rooting for Matilda for the big win, but here’s how I think some of the awards will break down.

Word on the street is Best Score will go to Kinky and Best Book will go to Matilda. Best Direction I think will be swiped by Diane Paulus for Pippin. Remember Pippin? Yeah, that’s the big sweep of the year for revivals. It should grab Best Revival, Best Direction, Best Choreography (Chet Walker), Best Actress (Patina Miller as Leading Player), and Best Featured Actress (Andrea Martin as Berthe). It may even take Best Featured Actor (Terrence Mann as Charlemagne), but that’s a tight race between Terrence and Gabriel Ebert as the father in Matilda. For Best Actor in a Musical, it’s a race between two men in drag: Bertie Carvel as the evil Principal in Matilda and Billy Porter as the fabulous Lola in Kinky. My money’s on Billy.

As for plays, I’m thinking Best Play will go to Vanya and Sonia and Masha and Spike by Christopher Durang, which I saw last night (go see it immediately. You’ll laugh your face off). Best Revival will likely go to Who’s Afraid of Virginia Woolf?, but The Trip to Bountiful may make some surprise appearances. Tom Hanks will probably walk away with Best Actor for Lucky Guy, although I would like to see Nathan Lane win for The Nance. For Best Actress I don’t know what’s going to happen! I personally want to see Kristine Nielsen win for Vanya, but I only saw two of the nominated performances so I’m honestly not informed enough. I wouldn’t be surprised if Judith Light wins for Best Featured Actress in The Assembled Parties, and Best Featured Actor expectations are mixed. I really didn’t see enough of the nominated plays this season. Instead I was at The Heiress. Ugh.

This is starting to rattle on so I’m going to stop here, and I haven’t even covered all the lighting, scenic, and costume design, not to mention sound design and orchestrations. But no matter who ends up taking home the awards on Sunday night, it’s really about seeing the great performances of new and old shows, enjoying a hopefully fantastic opening number with host Neil Patrick Harris, and celebrating a night of theatre. So tune in to CBS on Sunday at 8pm ET.

It’s hard to put into words how I felt about this production and still be taken seriously. I’m concerned everything I write is going to sound cliché and over-the-top. Even so, I can’t stress this enough: it really is that good. I forgot theatre could be that good. But that’s one reason I keep going back to show after show, ranging from terrible to mediocre to great. One after another, I go to the theatre hoping my mind will be blown. Like me, the audience that night was waiting to see a show that would wake up every single one of their senses.

The energy in the house was electric from the get-go. The opening chords of “Magic to Do” began, and people went crazy. It was like a rock concert. But, you know, at a Stephen Schwartz pop musical. And from those opening moments through the last, the show never falters. It builds and builds until the climactic (or is it anti-climactic?) ending. It continues to outdo itself. There were moments when I felt like I was levitating. Between the orchestrations, cast, choreography, lights, set, and circus acts, it can do no wrong in my mind, and everyone who has seen it knows this to be true (we’re clearly not including Ben Brantley in this scenario).

For those of you who don’t know the show, Pippin first hit New York in the early 1970s, Fosse-ing its way onto Broadway and winning Ben Vereen a Tony for Best Actor as the devilish Leading Player plus a handful of other awards. It is loosely based on the real-life Charlemagne (Charles the Great) and his son Pippin from the Middle Ages. Using the premise of a traveling theatre troupe, it tells the story of a young man named Pippin trying to find his place in the world and looking to achieve ultimate fulfillment. This particular production uses the framework of a Big Top and never lets up on the circus convention. Acrobats, animal cages, tricks, hoops, unicycles, and magic fill the action from start to finish, all leading to the promised unparalleled greatest finale.

If you’re already a fan of the show, it’s a treat experiencing the newly tweaked (for the better) book, and there are also some nice cuts/revisions to the songs. I can’t say enough complimentary things about the cast. If Patina Miller does not win a Tony for her work as the Leading Player, color me dazed and confused. I enjoyed her performance in Sister Act a couple seasons ago, but it’s like this role was made for her. She radiates this intoxicating energy with her strong vocals and tantalizing smile. Not to mention those fantastically toned arms. Speaking of which, this cast is beautiful. Can we talk about that for a second? Very good-looking people in astonishing shape, which is quite necessary considering some of the feats performed. The circus team is fantastic, from their mind-boggling, grab-the-person-next-to-you tricks to the more under-stated moments like Pippin’s brief conversation with a severed head. I was sorry to see that Matthew James Thomas (Pippin) and Rachel Bay Jones (Catherine, his love interest) were not recognized for their work by the Tony committee. I thought their performances were nuanced, hilarious, and beautifully sung. Terrence Mann (Charlemagne), of course, is Broadway royalty, and if you missed Charlotte D’Amboise (Fastrada) as Cassie in the recent revival of A Chorus Line, now’s your chance to see her big “Music and the Mirror” number in the form of “Spread a Little Sunshine.” For show highlights, click here and here.

So yes, as you can see, I could clearly go on and on about Diane Paulus’s brilliant production. All my reviews after this will likely pale in comparison, but seriously: go buy your tickets before Pippin wins many a Tony Award on June 9th. It is not to be missed.

And if you’re still having hesitations, just go to see Andrea Martin’s big scene as Berthe. Trust me, you will not regret it.